Collecting autographs of US presidents is a landscape fraught with land mines.

Collecting autographs of US presidents is a landscape fraught with land mines. Our rule of thumb: unless the presidential autograph was acquired in-person — (through some special access or luck of the draw) – assume the signature is secretarial, a clever litho-print, reproduced by autopen or even a forgery.

Within the past 20 years, obtaining an authentic presidential autograph has been challenging. It boils down to access, influence, and whether or not you contributed to a presidential campaign as a volunteer or donor. An in-person autograph might be acquired at a book signing or being near a president, as he exits a TV studio, restaurant or other public venue.

Seeking contemporary autographs by writing to The White House is a crapshoot. Your odds are better at a casino. It is widely known that President Barack Obama is handed a few letters each day or week, selected by his staff, that he answers in person. Keep in mind that The White House receives more than 10,000 letters a day. Nearly 99.9% of all White House letters are signed by a variety of Autopen templates.

Again, there is the rare exception. “41” as George H.W. Bush was often called, was a phenomenal letter-writer, back to his days as vice president. While president, he favored note cards bearing the gold presidential seal that measured 4”x4”. He also was known to self-type some of his correspondence. It was my privilege to correspond with President Bush for many years. In the early 1990s I receive a charming letter from him written from his Kennebunkport summer home. The note was typewritten but, in another type-font, his secretary noted that the President had “self-typed” the note. Again, these are rare exceptions. Today one can buy Bush 41 presidential notes for $300-400 at auction, again depending upon content. 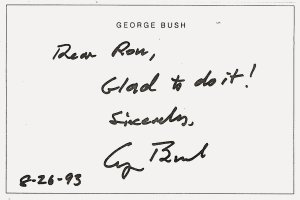 Prior to Eisenhower, (with the introduction of the autopen) it was much easier to obtain a presidential autograph. This certainly was the case with FDR, Truman, Hoover, Coolidge, Harding and other chief executives of the 20th century in the form of signed White House cards, photographs and letters. Such items are not necessarily considered “rare,” but it really depends upon content. Want a really rare collectible? Consider presidential-endorsed payroll checks.

Presidents of the 18th and 19th century are more readily available while autographs of Washington, Jefferson and Lincoln are highly collected and prices reflect their popularity. Caveat: the more important the president, the greater the odds that it is a forgery.

Every so often bound volumes of presidential autographs appear on the auction market. As you might imagine, these command prices in the thousands of dollars. A few years ago such an album, circa 1915, custom-bound in leather with the presidential seal, sold at auction for $45,000. If you have deep pockets this might be a good source of early autographs.

If you’re going to collect presidential autographs, do your homework. Establish a relationship with a dealer you trust. Read as many reference books as possible. Become familiar with the signing habits of presidents and the myriad of autopen templates that have been published, as well as secretarial examples. A few books you might enjoy (most of them are out of print but sometimes available on Amazon): The Robot That Helped To Make A President – Charles Hamilton – 1995 – (one is being sold on Amazon for $430); From the President’s Pen: An Illustrated Guide to Presidential Autographs – Michael Minor and Larry Vrzalik – 1991 State House Press, TX.; In the Presence of History: The Authoritative Guide to Historical Autographs for Collectors, History Enthusiasts and Collectors – Steven Raab – 2009 Diamond Press.